A grateful heart: A 30-year-old mother of three is grateful for her future after lifesaving bypass surgery 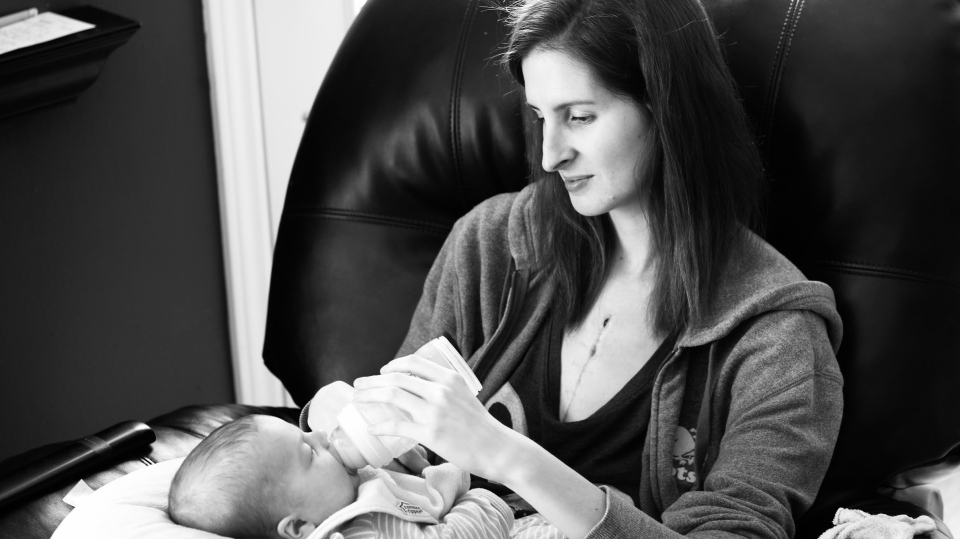 France Contant was a blissful 29-year-old; a wife and mother of three beautiful children under the age of 5, including a newborn.

“Never in my wildest dreams did I think I’d have the family I have now,” said Contant.

France and her husband Serge were deliriously excited about their future, until faced with the terrifying reality that France might not have one.  Just one week after the birth of their baby, Brielle, in January, their lives would change.  France began feeling unwell, which she attributed to gas, or perhaps, food poisoning.

“It was like intense pressure and it was burning.  My husband grabbed some ice packs and I held it up to my chest and within five minutes, or so, it passed,” said France.

The symptoms would ease, however, a recurring, more severe pain, often returned.  On one occasion, while nursing Brielle, the pain became unbearable.

“It got to the point where my arms went numb.  I looked at my husband and said grab the baby, I’m going to drop her,” said France.

“It was the worst pain I’ve experienced in my life.”

“The look of fear went into her. She said ‘Serge, I can’t feel my arms’ and I remember watching her.  From the waist up, it was like she had been rolled with red paint from the bottom up,” said Contant’s husband.

France was rushed by ambulance to the emergency department in Timmins, and later to Sudbury hospital, where at 29-years of age, doctors would deliver staggering news.

“I had had a massive heart attack,” France said.

France was diagnosed with SCAD, or Spontaneous Coronary Artery Dissection. A sudden tear in an artery wall of her heart resulted in a blockage.

“There’s a flap that forms inside the artery that can block the artery completely which is what caused the heart attack. It was a massive heart attack and the damage was so extensive, half of my heart became stunned, and it formed a blood clot in the heart chamber.”

The causes of SCAD are largely unknown.  The condition primarily affects women aged 30-60. It accounts for roughly 25 per cent of all heart attacks in women under 60 years of age.  Pregnant and post-partum women can be at risk. SCAD may lead to heart attack, cardiac arrest and even death.

France said while most SCAD patients heal naturally, she was airlifted to the University of Ottawa Heart Institute, first for observation, and later, surgery.  However, before her operation, she had another setback.

A six-hour, double-bypass surgery at the Heart Institute would resolve France’s SCAD issue. However, being away from home and family for more than six weeks brought a different kind of heartache. France would spend her 30th birthday in hospital.

“I missed a lot of stuff while I was in the hospital.  I missed our son’s school registration, I missed our daughter’s fifth birthday, for me those are big milestones in their life but I knew if I didn’t get better I wouldn’t be around to see anything else anyway,” said France.

“So I said you know what France you need to push through this,be strong for your kids because they only get one mom,” she said, tears filling her eyes.

Once home, doctors asked France not to lift anything, including baby Brielle, for 12 weeks. When that time was up, though, she cherished the moment, lifting the baby from a bed and kissing her gently on the cheek.

“How does that feel?” husband Serge asks while recording the moment on his phone.

“It was a momentous time for us,” she said with a grin.

From her Timmins’ home during the COVID-19 lockdown in March, France participated remotely in the Ottawa Heart Institute’s Cardiac Rehab program.

“My recovery went flawlessly,” she said.

France also joined participants across Canada in September’s “Jump In” initiative—a fitness challenge raising funds to benefit women, just like France. All donations are being matched by corporate donors until Oct. 7.  You can donate at JUMPINNOW.CA

France Contant is grateful for her heart health and her future; a gift to her family from the lifesavers at the University of Ottawa Heart Institute.