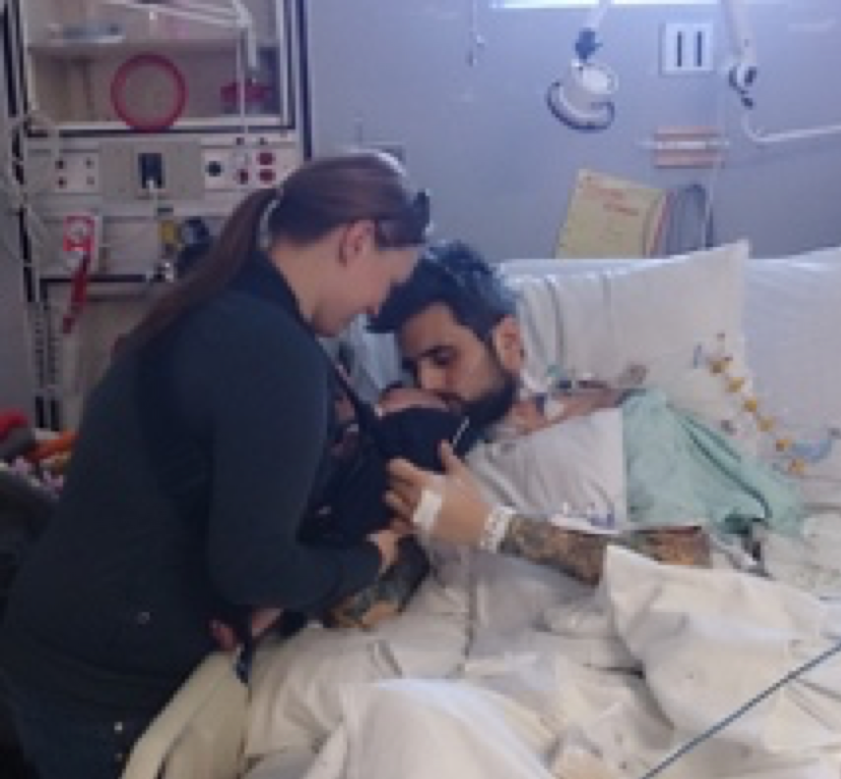 My husband Brian was 15 years old when he was diagnosed with viral cardiomyopathy. He went through life without any major medical interventions. He has taken many trips to the ER but was always treated, stabilized and discharged. We always knew it was only a matter of time before things would worsen but when it would happen was unknown.

In August 2013, we found out that we were expecting our second child in April. We were doing some major home renovations to prepare for the new baby when Brian fell ill. I could tell that something was odd as he coughed a lot, slept longer after meals and was exhausted all the time.

During a routine visit to his cardiologist, they revealed that his stress test tolerance had decreased significantly. The cardiologist suggested an ICD but Brian declined. They decided a few weeks later to begin outpatient workups to get him listed for heart transplantation, which was to be done at his own leisure over the following few weeks. We had the option of going to Edmonton or Ottawa for the surgery. We chose Ottawa.

Over the following months, Brian had many tests done to be considered for heart transplantation. It was a stressful time for us: our baby was due in less than three weeks and Brian’s heart was failing further. His cardiologists were trying to ensure that he would be stable enough to attend the birth of our child in the coming weeks, since we were both going to be in the same hospital. Arrangements were being made to have him come to the labour and delivery ward with a nurse.

We received some good news and some bad news weeks later.

The good news was that Brian was accepted and was placed on the waiting list for a heart transplant. The bad news was that they wanted him in Ottawa immediately to wait for this heart. We had less than three hours to say our goodbyes. Our family showed up at the hospital when he was taken away via ambulance to fly to Ottawa. This was a difficult time for our son; this would be his longest time away from him ever. To top it all off, our baby was overdue so he also wouldn’t be around for the birth. This was hard on both of us but we knew we both needed to be apart.

We had the option of going to Edmonton or Ottawa for the surgery. We chose Ottawa.

Brian flew to Ottawa with all his medical equipment, a nurse, a cardiologist and his mom for support. He was transferred to the Ottawa Heart Institute. Two days after Brian’s departure to Ottawa, we had a healthy baby girl named Sienna Brielle.

Brian spent a total of two weeks in the CCU at the Heart Institute. His mom spent her days there with Brian and I would Facetime with him so that he could stay in touch with us and see his new baby daughter. While he was in a lot of pain and often on many pain medications, I knew that Peggy, a nurse, was quite amazing to Brian and his mom.

I had gone from being with him in Winnipeg every day to having little knowledge of the daily happenings in the hospital. How long would he be there? How long would he wait for a heart? How many people were ahead of him? What was it like in that hospital? Was the staff treating him well? There were a million thoughts racing through my mind every day. There were several complications during Brian’s wait for a heart. All this was going on so far away from home and I could not be there since our baby was too young to fly. I was planning to come and visit as soon as the pediatrician cleared Sienna, our daughter, to fly. I know that Brian was getting worse and the only thing that was left to do was to give him a new heart.

What was such an emotional struggle was praying for that heart to come knowing that someone else had to die. I know what an amazing gift organ donation is but I also know how difficult it is to lose a loved one.

Our daughter was finally cleared to fly out on April 22 and the morning of the 23rd, Brian called me to tell me a heart was waiting for him and that they would be doing his transplant surgery sometime that afternoon. I was speechless and terrified and excited; this was what we had been waiting for.

I had a chance to talk to the surgeon who was part of the transplant team taking the lead in Brian’s surgery. His surgeon was the wonderful, amazing Dr. Boodhwani. Brian was taken into surgery around 2:00 pm and the surgery was completed around 9:30 pm that evening. While I was not there, the surgery went well.

When we arrived in Ottawa, we walked over to the CSICU where Brian met his daughter for the first time. The nursing staff in the CSICU was in tears when we walked in because they learned that he missed her birth and endured a heart transplant all in a matter of two weeks. One of the doctors there (who we called Dr. Ben), said “this man just had a heart transplant and is meeting his new baby for the first time; why is no one taking a picture of this moment.” He took my phone and snapped a couple pictures of us together.

Brian spent a week in the CSICU where he began his road to recovery. We had been through a lot and all the staff down in the basement was amazing. Nurses (Taryn and a couple others) offered their personal baby belongings to use during our stay including an infant tub, a play mat and bouncer chair and samples of baby formula. Another nurse arranged for us to have a baby bassinet from the labour and delivery ward at the Interns Residence so that Sienna had a place to sleep. It was amazing to see everyone taking care of my husband and being so kind and helpful to us. I was so grateful to the staff at the Heart Institute; everyone was so kind, caring and friendly that it made me feel so good in our decision to have the surgery done there. Brian experienced some severe pain throughout his recovery and needed further surgery to fix the bleeding around his heart. He was eventually moved back up to the 5th floor ward.

I knew he was getting better but he just had to stay a while longer to heal from his last surgery. When I knew he was relatively stable and recovering nicely, I booked a flight home so that I could get back to our son.

We left Brian in Ottawa on May 17. It was very difficult but I knew he was in good hands. This place was magical to me. When things just felt like there was no hope left, the Heart Institute created a brand new beginning for our family. We had a chance to be a family again and Brian could finally begin to heal and live without heart failure. My interactions with everyone in the Heart Institute felt so natural and easy. I met other patient’s family members who could relate to our situation or at least understand our fears. The volunteers, many of whom I discovered had some personal connection to the Heart Institute, were paying forward their time to the building where staff had cared for them in their personal struggles with heart problems.

Brian was back home on June 4. This was our first time together as a family. He is doing quite well in his recovery and we are glad to have him back home, alive and enjoying his life again.

We are forever thankful for Brian’s second chance at life. We owe it all to the wonderful, amazing staff at the Ottawa Heart Institute for making it possible.