The night before a life-saving operation, Brock Thom’s heart got what it wanted most of all — a bride. 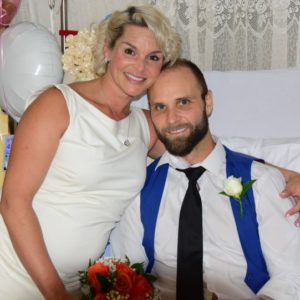 In the days before Brock Thom arrived at the University of Ottawa Heart Institute, the busy 37-year old entrepreneur, who’d started a construction company only a year earlier, was experiencing shortness of breath. He decided to check his blood pressure at his local Shopper’s Drug Mart. Three times, it turned up “zeroes across the board,” Brock says. But what propelled him to call his doctor was when he woke up out of a dead sleep with shortness of breath and pain in his chest.

“At that point, I decided it was probably a good idea to see my doctor,” he says. “My appointment was at 8 a.m. and my doctor did an ECG right there and told me that I was in ‘heart block.’ He wanted me to go to the hospital immediately by ambulance but I thought that was crazy, so I asked my girlfriend Melissa to drive me there.”

Brock and Melissa (Mel) had been together since 2017. They both led fit and active lifestyles. Mel, a massage therapist, ran marathons and is a body builder and Brock is a life-long soccer player and coach. Together, they were looking forward to the arrival of their first child, the baby’s due date was only weeks away.

When they arrived at the Ottawa Hospital, Brock was monitored in their Emergency Department before being transferred to the Heart Institute. Mel shares what happened right before the transfer;

“Just as the porters were coming to transfer him to the Heart Institute, I noticed his blood pressure was low — 50 over 17,” she says. “I asked him if he was dizzy. He said ‘no.’ The nurse redid it and it was even lower. They rushed him directly to the Cardiac Intensive Care Unit at the Heart Institute and this swarm of nurses and doctors were there. Twelve hours after the doctor’s appointment, he was in heart surgery to save his life.”

To stabilize him, at least temporarily, doctors put an Impella heart pump in his chest. The pump would take over for the heart by pumping blood to the rest of Brock’s body. This would buy them a bit of time to figure out what to do next.

“I’ve had an irregular heartbeat as long as I can remember,” Brock says “I had gone to various specialists as a child, but there were never any overwhelming symptoms. I only ever suffered from the odd dizzy spell every couple of weeks or months. No one was ever able to determine why I was experiencing the dizzy spells and they could never link them to the irregular heartbeat.” Now, at the Heart Institute, it became apparent how serious it was. Brock adds. “It was totally surreal.”

Mel picks up the story. “They said he needed a pump because his heart wasn’t strong enough to make it through the night, it was probably the longest day of my life. Doctors came out and said everything went great. He pulled through. Everyone else left and I waited till 4:30 a.m. and then I drove home. When I walked in the door, it hit me like a wave that he might never come home again. I shook that out of my head and told myself ‘I can’t ever go there.’”

From that point on, Mel was determined to stay positive. When she explains the story to others now, they say how amazing it is that the trauma didn’t send her into labour.

“That wasn’t an option,” she says with a laugh. “Our unborn baby and I were focusing on “Daddy” so he could be there when it was time for the birth.”

Getting things done on borrowed time

Taped to the bottom of Brock’s bed in the intensive care unit was an ultrasound photograph of his future child, whose sex the couple didn’t know at that point. They wanted to save that news until the baby was born.

“The doctors and nurses would see the photo on my bed and congratulate me,” he says. “Everyone looking after me became very conscious that that was part of the equation. I was about to be a first time Dad.”

Following the implant of the heart pump, Brock underwent another procedure – the insertion of an external pacemaker. The doctors discussed one more possible surgery but before that happened, Brock and Mel made some decisions of their own.

Brock decided he wanted to propose to Mel and get married immediately, right there, in the hospital and together they decided they wanted to find out if their baby was a boy or girl so they could choose a name.

Two decisions that reflected their fear that Brock may not survive the next procedure.

“I just wanted to know as much information about the baby as I could. I was scared I wasn’t going to be around,” Brock says. “That week, the doctors thought I may need a heart transplant. Just hearing those words was really difficult.”

Brock’s story had already captured the hearts of his nurses and doctors when he revealed to three people — his sister, his mom and nurse Christina McGuigan — that he wanted to propose to Mel and get married from his hospital bed.

“I was going to propose to Mel, but I didn’t have a ring,” he says. “It was pretty spur-of-the-moment and I was confined to my hospital bed.”

Nurse Christina McGuigan jumped into action. First, she talked to her manager to find out if it was even possible for the two to get married next to his bed.

“My manager was all on board,” Christina, a gregarious Prince Edward Island native says. “She’s a romantic as well so she was pretty excited about it. [Brock] told me he’d asked his friends to bring a ring, but they wouldn’t get to the hospital before Mel so he asked me if there was anything we could use. I said, ‘Yeah, I’ll find something.’”

In a moment of inspiration, Christina fashioned an engagement ring out of ground wires used with pacemakers and that’s what Brock used to propose to Mel.

But the nurse didn’t stop there.

From outside the room, Christina recorded a video of the proposal (Mel said “YES!”) She also tracked down the forms needed to get a marriage license. Mel and Brock filled them in and Mel took them to a city service office where she could get the license right away.

“Christina went above and beyond her role as my nurse and stepped in as our wedding planner,” Brock says. “The second word got out that we were having a wedding in my ‘room,’ all the nurses started helping out. They made all kinds of decorations. Some of the porters were involved in decorating and preparing for the ceremony, which was unbelievable. “

Christina shares how the wedding was a team effort; “I scrounged around my house to find some lights and other little decorations and one of the ward clerks brought in a lace curtain for behind the bed, so it didn’t look so hospital-y,” she says. “One of Mel’s friends brought in a sign that said ‘Happily ever after starts here’ — I thought it would make sense to put it on top of the machine that was keeping him alive.”

Brock went into the Heart Institute on a Friday, had the pacemaker put in Saturday, proposed to Mel at 4:30 p.m. the following Wednesday and they were married at 6 p.m. on Thursday.

Mel lights up when she talks about her wedding. “I can’t say enough about what Christina and all the staff did for us. Within 30 seconds of me saying ‘yes’, she produced the paperwork to get the license, a cake, a photographer and flowers. She also changed her shift so she could be there for us. Unbelievable.”

Mel called a friend to see if he knew anyone who could marry them the next day and the friend’s mother ended up being their officiant.

Before he proposed, Brock had called Mel’s father in Thunder Bay and he was able to fly to Ottawa for the ceremony. Her mother lives in Ottawa and the mother-daughter duo spent the night before the wedding, searching for a dress.

On top of all the surprises that week, they were in for one more. Heart Institute cardiac surgeon Dr. Fraser Rubens had offered to surprise the bride by singing as she walked down the makeshift aisle. He performed a beautiful version of the classic love song “I’ll Walk Beside You.”
Mel beams at the memory. “It was amazing, so moving, I couldn’t have asked for a better, more perfect wedding.”

After the ceremony, Brock and Mel had another announcement to share with their guests.

Mel’s doctor had arranged for her to have an ultrasound on their wedding day.
The technician then put the results in an envelope for them to open with their family and friends. “We were less than two months from my due date and the baby was getting a little squished in there” Mel says with a laugh. “The note said it would most likely be a boy. Before Brock’s surgery, we were able to choose a name together.”
The next day, October 4, Brock underwent an ablation, which destroys tissue that allows incorrect electrical signals to cause an abnormal heart rhythm. Not an uncommon procedure but more complex for Brock because of the heart pump in his chest. His recovering went well and he was able to go home with Mel on October 25.

Love for the Heart Institute

“Coming out of my stay at the Heart Institute, I didn’t really have time to think about what had just happened,” Brock says. “Then we had Sawyer. I think I was in shock for a few weeks, but I’m so happy and having him here now, I don’t know if I can put it into words. I feel as though I’ve been given another chance at life. To be able to participate in his life, and see him grow and witness all this is unbelievable.”

He says he’s incredibly grateful to the Heart Institute — the doctors who helped save his life and the nurses who cared for him and worked so hard to produce a perfect wedding for the couple.

“I was aware that the Heart Institute was here in our city, but I didn’t pay too much attention to the fact that it was something that was available,” he says. “I’m so happy that it exists and that I live here. I met people from all over the country who have to travel to make use of this facility.”

“While Brock was in there, we met so many people who’d travelled from the East Coast, West Coast, all over, to come to the Heart Institute, but we have it right here in our city and I didn’t realize until we were in that position how fortunate we are to have access to world-renowned doctors,” Mel says. “And the facility is brand new. You’re looking at all this equipment hooked up and you just think, ‘We’re so fortunate, all of this was because of generous donors, we are so lucky.”

Today, a sign hangs over the buffet in the couple’s dining room. Made by the ward clerk, it has one rectangle per letter, it says “Just Married.” She fashioned it out of file folders and used the strings that respiratory therapists use to hold endotracheal tubes in patients to string the letters together. It hung outside Thom’s CICU room for the duration of his time there.

This simple sign is a poignant reminder of not only the life changing experience Brock had at the Heart Institute, but how the amazing, and dedicated staff made their dreams come true.