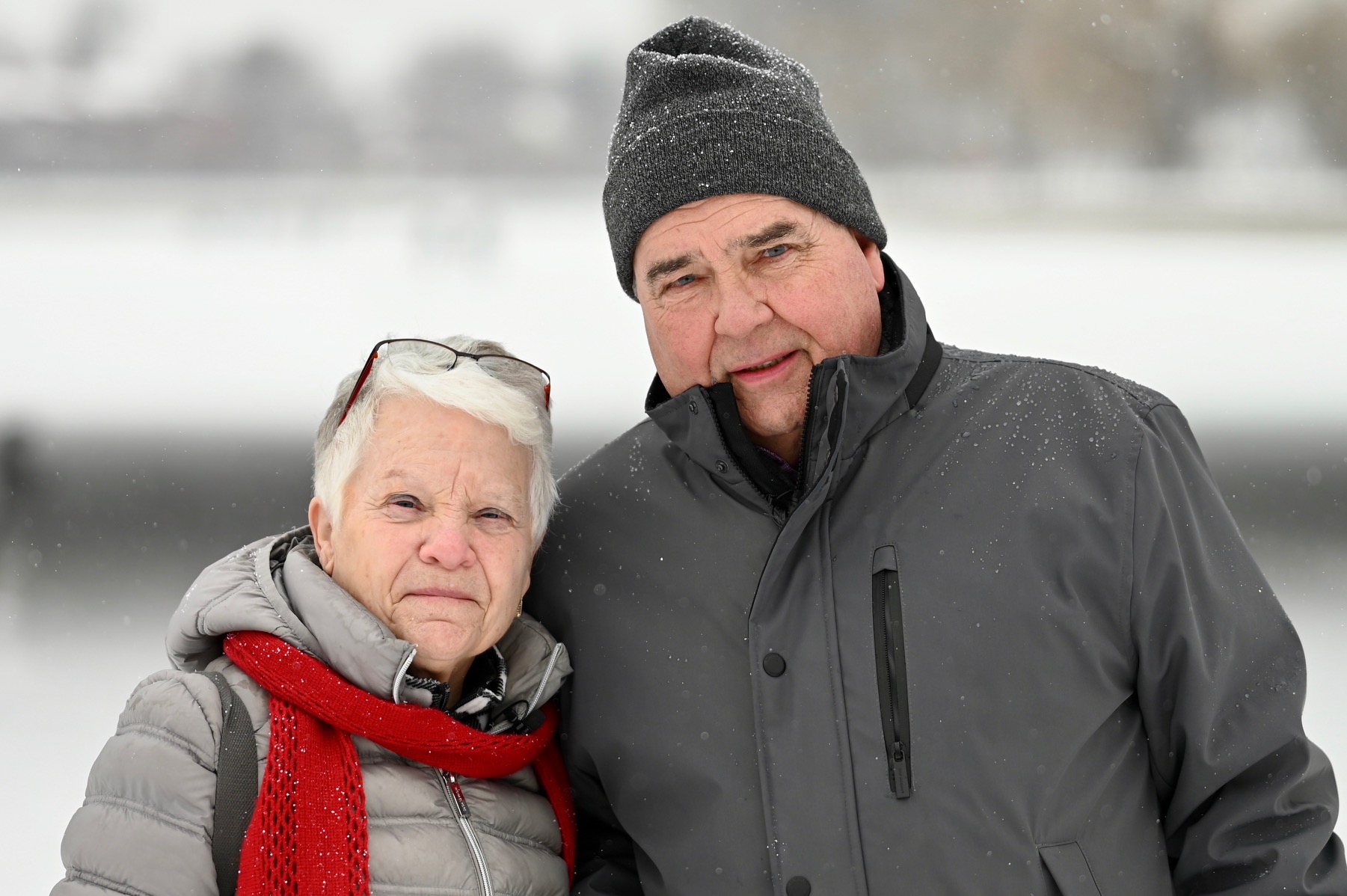 Many residents of the National Capital area look forward to embracing all that February has to offer as they make their way through the remaining weeks of winter and anticipate spring, regardless of the predictions from various groundhogs. For Micheline Legault, at age 77, that includes hiking, snowshoeing or cross-country skiing around her home in Chelsea, Quebec.

This year, during Heart Month, Micheline reflects on her own “heart journey” that began 17 years ago when she was only 60. On the morning of February 26, 2004, she decided to head into downtown Ottawa and enjoy a skate along the Rideau Canal Skateway.  The weather was perfect, clear skies and late morning temperatures hovering around -6o C.  As a part-time employee of Air Canada, Micheline was contemplating her shift at the airport that afternoon as she enjoyed her skate.  It was close to 10:00 a.m. and as she was skating, she began to feel unwell. Around the same time, her husband Francois called her mobile phone, checking in to see if she was working that afternoon.  It was Francois’ call that set the wheels in motion that ultimately saved her life. He would be the first in a list of saviours that stepped in as Micheline experienced a heart attack.

Micheline explained to Francois that she had some tightness in her chest and he immediately asked her to give her phone to the first person who skated by. Enter saviour number two, an unknown gentleman who took the phone to speak with her husband and then immediately led Micheline to a nearby pub and called paramedics.  The ambulance first took Micheline to the General Campus of The Ottawa Hospital but a quick assessment there had Micheline transferred immediately to the University of Ottawa Heart Institute.  Once at the Heart Institute, Micheline was under the care of Dr. Lloyd Duchesne, Micheline’s saviour number three.

One of Micheline’s arteries was 100% blocked and Dr. Duchesne inserted two stents, a regular one and a drug eluting stent (releases medication slowly that helps prevent scar tissue and possible re-narrowing of the artery.)  Unfortunately, Micheline fell into a coma and remained in that state for three days.  On Sunday, February 29, she moved her little finger and nurses called Francois with the good news, that Micheline would wake up soon.  One of the “mementos” that she has kept to this day are the notes that were left by the nurses at her bedside so she wouldn’t panic if she woke up alone and confused. The first was an explanation of what had happened to her and when, and the second note below had the current date, her nurses name and where she was. Micheline would remain at the Institute for nine days before she was released.  Although she didn’t remember the first visits from her sister Huguette and her close friend Michelle (who both came from Toronto) they were a great comfort and help both her and Francois when she began her recovery at home.

Living in Chelsea, Micheline took advantage of the rehabilitation program that was in place for patients who couldn’t easily access the institute. For six months she was monitored by regular telephone calls as she recovered her strength and waited for Dr. Duchesne to give her the go-ahead to resume driving and get back on the tennis court, a game she still enjoys playing regularly.  She found the program extremely beneficial and urges all patients to get as much support as they can during their rehabilitation.

During the past 17 years, Micheline has needed only one follow-up appointment at the Heart Institute, but she is monitored regularly by her family doctor.  At the time she wasn’t aware of any heart health issues in her family although her mother had died suddenly in 1991 and no cause was identified, and her brother had open heart surgery when he was in his late 60’s.

Micheline retired shortly after her heart attack and together, she and Francois have filled every moment of their “gift of time.” In the summer they can be spotted kayaking on the Gatineau River, taking long bicycle rides, and appreciating an abundance of nature in their back yard including occasional visits from the local deer. Post pandemic they look forward to travelling again and, although they have enjoyed outdoor winter activities this year, spending some of the winter in a warmer climate.

Together Micheline and Francois hope their story reaches the unknown fellow skater who helped save her life on the canal that Thursday morning back in 2004. Because of his willingness to step in and take-action when it mattered most, the quick response of the paramedics and the life-saving treatment and exceptional care she received at the Heart Institute, they have enjoyed the last 17 years together. To all her “saviours” that day she will be eternally grateful.

Please give the gift of time to patients like Micheline, donate today at februaryisheartmonth.ca