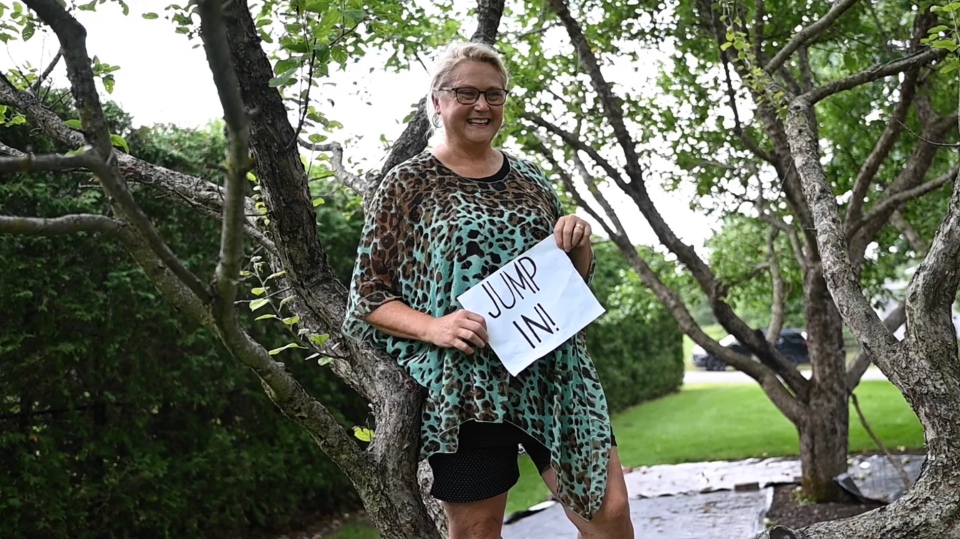 Natalie Tommy is hooked on raising awareness and funds for causes near and dear to her heart, specifically the Canadian Women’s Heart Health Centre and the University of Ottawa Heart Institute.

Flashback to the 1930’s when Natalie’s grandfather, Andrew Tommy (Andy Sr.), left his home in New Brunswick and moved to Ottawa. A gifted athlete with a head for numbers, he began an award-winning football career in the CFL with the Ottawa Rangers. Andy played football for 14 years with a break during World War II when he served our nation in the Canadian military. Andy and his wife Helen raised their three sons to be winners: they were competitive, passionate and competent. Together, the Tommy brothers, Andy Jr., Arthur (Art) and Fred took the alpine ski world by storm. Their family name is legendary as each of these young men represented Canada in World Cup and Olympic competitions.

Andy Sr., a strong healthy man and CFL Hall of Famer, retired from the Dominion Bureau of Statistics in 1971. That summer he was adding the finishing touches to their cottage and looking forward to the years ahead with family. The following April, in 1972, Art Tommy received the call that he was gone. He was only 62 years old and taken from his family by a heart attack. It’s a day Natalie will never forget.

For the Tommy’s, heart disease continued to ravage its way through the family. Natalie lost her own father Art in 1994, at age 60. He was one of the best alpine skiers of his generation, co-founder of the Tommy & Lefebvre retail sporting goods chain as well as a partner in the Edelweiss Valley Ski and Golf Resort. Art was also committed to giving back to a community that had given him so much, coaching several ski teams, supporting hundreds of local racers, and leading the Canada-wide Master Retailer Program in 1985 that raised over $1,000,000 to support the National Alpine Ski Team’s drive to the 1988 Olympics in Calgary.

Art’s death was a wake-up call for the whole family. Natalie’s Uncle Fred, the youngest of the three Olympic skiers, tried hard to listen to his body. He loved yoga, walking his dog and cycling, and was always full of fun and laughter. In February 2004, he went into cardiac arrest and died at age 62. Before the year was out, in November 2004, Natalie’s last remaining uncle, Andy Tommy Jr., a father and man who worked tirelessly building ski runs, lodges and managing Edelweiss, died at the University of Ottawa Heart Institute at age 71.

The repeated, heartbreaking loss of loved ones to heart disease has motivated the women of the Tommy family to pay attention to their own heart health.

During a vacation in Costa Rica, Natalie’s normally fit and active mother, Marilyn Tommy, felt tired and out of breath. She was excited to be on holiday but more and more, she felt she needed a nap in the afternoon. Both Natalie and her mum put it down to humidity and the heat. Neither of them recognized the signs, and definitely didn’t think about heart health. With no sign of improvement three weeks after the trip, Marilyn visited her doctor. Tests revealed she had an enlarged heart and an irregular heartbeat. A procedure at the Heart Institute corrected the problem. At the Institute they taught her how to recognize the signs that might tell her something is happening. Marilyn is an avid gardener, hiker and kayaker. When Natalie thinks about the strong men in her life, she will tell you that Marilyn, now 83, is the strongest of them all. Having received the gift of time from the Heart Institute, she is living life to the fullest every day, and Natalie and her brother and sister, Jed and Liz, have received the gift of time with her.

When the Heart Institute Foundation Calls

Natalie had been involved in a number of charitable causes over the years in Ottawa but had been in Toronto for nearly two years and realized she missed volunteering. One day she received a request to consider co-chairing the Heart Institute Foundation’s women’s golf tournament, the Jeanne Fuller Red Dress Charity Classic. The timing was perfect. Natalie was moved by the passion of the entire team involved with the tournament and found herself excitedly saying “Yes – I’m in!”

Natalie has always been a champion of women’s causes and passions and believes women can change the world, one conversation, one step at a time. Once she joined the committee, she had the opportunity to be part of a team of “accomplished, polished and driven women”. For Natalie, the committee was a shining bright light. Everyone was positive, willing to do the work it took to make the event a huge fundraising success. Surrounded by the highly engaged volunteers and the dedicated staff at the Foundation, she felt she was “home”.

Three years after Natalie joined the Red Dress committee and inside the vortex of the pandemic, everyone knew they had to do something different for 2020. Together they assembled ideas, insights and goals to dive into their first ever virtual event, JUMP IN: a challenge of 30 minutes of activity each day for 30 days, set to take place during the month of September.

Natalie’s goal, and what clearly became a passion for the entire committee, was to gain a national awareness of the research into women’s heart health at the Institute and the overall objectives of the Canadian Women’s Heart Health Centre. At the same time, they wanted to foster a sisterhood that would (in a fun and engaging way) support each other with wellness goals, encouraging each other to be active, one of the keys to preventing heart disease. JUMP IN is about positive action and prevention.

“Collectively, we knew this had to be more than just an event to raise funds, it had to be a movement women and men would engage in, and benefit from. The success of the event was measured by the numbers of participants we garnered across the Country, the conversations shared between them on social media about women’s heart health and the funds raised.” (Natalie Tommy)

JUMP IN was an amazing success. Over 2,025 participants, 1.8 million minutes of activity and over $150,000 raised for the Heart Institute and the Canadian Women’s Heart Health Centre.

Natalie has also been able to take what she has learned through her Heart Institute volunteer work and transferred it to her career. As VP Marketing and Branding for the Nautical Lands Group and Wellings Properties, she has a front row seat to see the importance of wellness as we age. She feels it has given her increased clarity and shares it with the residents in their 55+ communities, as well as with her colleagues at head office. Corporately, Wellings focuses on independence and the role fitness and wellness play in keeping that independence. Again, the synergy for Natalie between JUMP IN, her core values and those of the Wellings was a match made in heaven for all concerned.

The Next Big Jump

When reflecting on the success of JUMP IN, Natalie likes to say it created a movement. One which will continue to evolve as participants stay connected, gently wrapping arms around each other with words of encouragement. What began as 30 days for many will turn into months, then years, hopefully a lifetime of healthy living. JUMP IN has a personality and life force of its own and it will be the participants who will shape the next steps.

For Natalie, JUMP IN was about a leap of faith. She credits the success to her entire planning team, the hardworking staff at the Foundation and the participants who shared their daily posts on social media. She is grateful to the corporate sponsors who came on board to match donations and provide prizing, and to the activity partners who offered new and challenging options every day.

If you Jumped In this past September, you are on a journey to improve your own heart health, and in Natalie Tommy’s heart, she couldn’t ask for anything more.