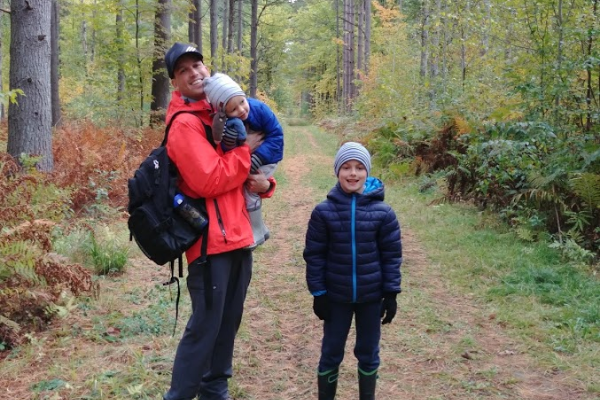 Pierre Tranchemontagne, a young father and elementary school teacher at Carrefour Jeunesse de Rockland, has always been fit and active. That’s why, on July 17, 2017, at the age of 38, he was both shocked and emotionally shaken when he suffered a heart attack.

At first, Pierre began feeling a little discomfort after an intense hockey game. His right arm felt weak, and he had heartburn, but there was nothing to make him suspect that his heart was in danger. Pierre hadn’t played hockey for a few weeks, so he chalked it up to over- exertion. He wasn’t feeling what he thought were the “typical” signs of a heart attack and carried on with his day. That night, the pain woke him up, but again, he wasn’t too worried, thinking it was nothing more than heartburn. He and his wife, Julie Mérineau – who was eight months pregnant with their second child at the time – checked online for the signs and symptoms of a heart attack, but nothing seemed to correspond to what he was feeling.

Twenty-four hours after the symptoms first appeared, the couple went to the hospital. Pierre had an electrocardiogram (ECG), which revealed nothing abnormal, but to be thorough, the doctor ordered blood work just to be sure. While they were waiting, Pierre turned to his wife and said with a laugh, ”The ECG is negative, so let’s go home. I don’t feel like waiting here.”

The blood tests told a completely different story. Pierre was indeed having a heart attack.

He was immediately sent to the University of Ottawa Heart Institute. As he was being transferred he wanted to walk, but the paramedics made him use a wheelchair. That was when he understood how serious his condition was.

A million things ran through his mind: his wife, his five-year-old son, the baby on the way. He was distraught and worried, and he felt guilty.

Pierre’s heart health story started long before his heart attack. He was only 18 years old when his father died of a cardiac arrest. Pierre knew what it was like to be without a father for many of life’s important moments and didn’t want his children to grow up without their father.
“I know what it’s like to lose a parent, and I didn’t want my sons to experience that,” he explains earnestly.

Fortunately, as the paramedics told him, he was in Ottawa, home to the best cardiac care available in Canada. “We’re lucky to have the Heart Institute here in Ottawa. It’s an incredible institute,” he says. As soon as Pierre arrived, he felt as though he was the centre of the world for his health care team.

“When something like that happens to you, you’re so vulnerable, and the entire team at the Heart Institute understood what I was feeling, they comforted me and gave me a second chance at life” Pierre says, the emotion still in his voice three years after the event.

“I was here for the birth of my second son… and now I can watch both him and his older brother grow up. They’re the two most treasured things in my life” says Pierre, who continues to be grateful for his gift of time with Julie and their sons.

In February 2020, Pierre wanted to give back to the Heart Institute and decided to volunteer for the Foundation by raising funds for Heart Month and competing in the Ottawa Race Weekend as a member of Team Heart. “I want the Institute to be able to continue providing services to people who need it, and to help reassure and educate someone my age who experience something like I did. Being a Dad is a very important job that you have to work hard at and I don’t want to miss a minute of it.”