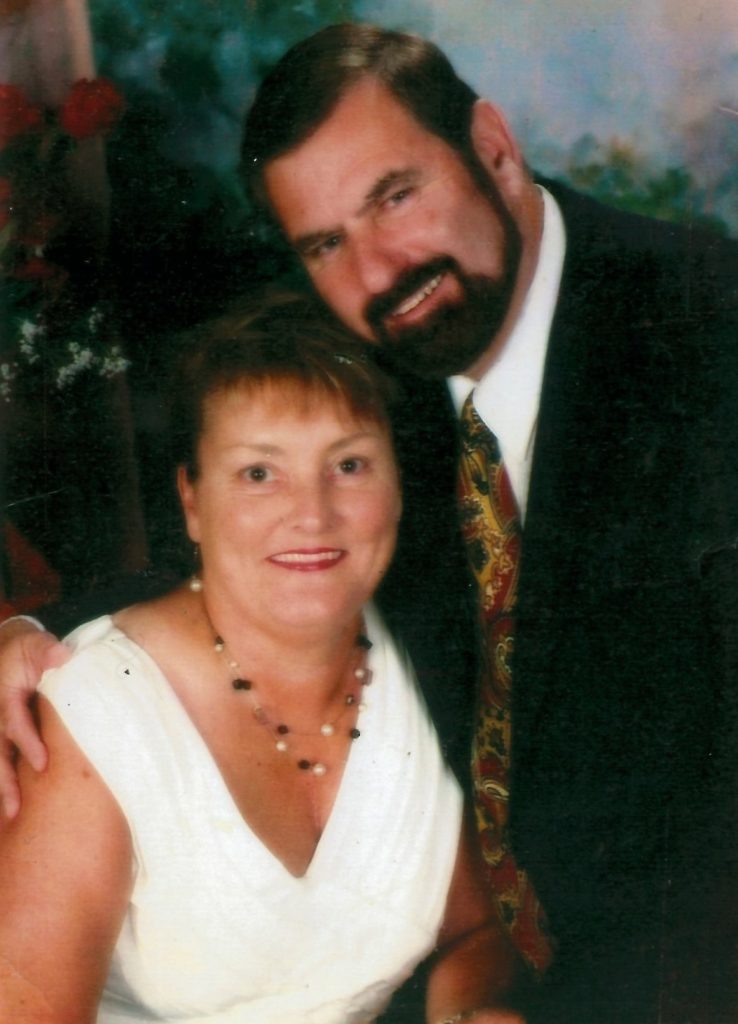 It is fitting that Donna Connolly hails from Newfoundland, because her strength is like a rock. But even a feisty, determined woman like Donna needed the Heart Institute — and she and her husband Greg urge others across Canada to seek out its services, and to give generously.

On a typical Saturday night, Greg and Donna Connolly sat down to watch Greg’s favourite show, “Mantracker”. After a playful back and forth where Greg mentioned that if he had to watch Donna’s soap operas, she could watch “Mantracker”, the couple laughed, and he turned his head back to the television. Suddenly he heard a loud gasp, “it was like a seal”, Greg said. He looked over at Donna. “When I looked, she was dead. I was sure.”

“I could feel my heart stop and everything slowly stopped down through my body, and I remember falling back, and I don’t remember anything after that, until I was on the ambulance stretcher”, said Donna.  “Then I heard Greg’s voice.” Donna had a defibrillator and a pacemaker, both of which were inserted 12 years ago as a precaution while she was in St. John’s. “If I didn’t have [the pacemaker/defibrillator] that night I would be in heaven now”, she said.

Donna and her husband Greg came to the Heart Institute a few months ago, so that Donna could benefit from a heart transplant. Having suffered for years from heart failure, broken bones due to blackouts, shortness of breath, and heavy coughing, Donna’s heart was at 18% capacity when a doctor in her home province of Newfoundland broke the news to her. “My darling, you’re a lot lower than that”, Donna recalled the doctor saying. “I have to tell you something, and it’s not very nice to tell you, but I don’t give you a year to live.” He told her she needed a heart transplant.

Within three weeks, Greg and Donna had found a temporary home  in Ottawa, and meeting with Dr. Davies and Dr. Yip for a full workup. By the time they arrived, Donna’s heart capacity had dropped to 9%, and she was added to the transplant list. During this time, Greg couldn’t help but think, “I came up here, and I figured I was going home alone.”

While waiting for a donor heart that was the proper size and matched her blood type, Donna continued to experience the blackouts she had suffered from for years. One night she fell. “My leg went underneath me, and I broke the tib and the fib (tibia and fibula) — both at the ankle”, Donna said. After being rushed to the emergency room, Donna was told that they wouldn’t be able to operate because her heart was too weak. They cast her leg and her recovery lasted over two months, during which time she couldn’t sit or bear weight. Due to the cast on her leg, she came off the transplant list. Donna wondered if she would “get through this”, but with constant check-ins from Jackie Grenon and other Heart Institute staff, she began to feel hopeful. Eventually, Donna’s cast changed to a walking boot, and she was placed back on the transplant list.

A week later, the Connollys got the call. “I was sitting there one evening and the phone rang, it was the nurse practitioner and she said, ‘We have a heart for you, can you come?’ I was there in 15 minutes — I washed my hair first — you can’t go out without your hair washed!” Donna’s strength is matched only by her fun-loving nature, and her deep love for her husband, Greg. The Connollys are exactly what you would expect of a couple in love from Newfoundland — friendly, down-to-earth, and humble.

After a long delay, as the donor’s family was not yet ready to let go of their loved one, a team retrieved the heart and it was time for Donna’s surgery. All of her nervousness went away when she met the anaesthesiologist who would prepare her for surgery. Dr. Sohmer’s jokes about Newfoundland relaxed her immediately. Due to this rapport, Donna ended up with the nickname “Madonna the Newfie”, and promised Dr. Sohmer and her surgeon, Dr. Boodwhani that she would gift them each with a bottle of screech after her surgery.

The Connollys were amazed by the compassionate care provided by the staff, and the humanity they were shown.  Donna sums it up, “well, if you ever met anybody in your life, that could take you from dead to living, it was Dr. Ben Sohmer.”

When Donna was admitted to surgery, her heart capacity had plunged to 7% and it was estimated that she had two hours to live. “They said it was the worst heart they had ever seen”, said Donna, “they didn’t know how it was beating.”

Before the surgery, her kidneys were starting to fail and she says she could actually smell her own heart rotting from the inside. “My heart was enlarged three times as big as it should have been, because it was beating so hard, it was enlarging itself, and the right side was doing the work for both”, said Donna.

Although she had been experiencing signs of heart failure for over 19 years, Donna was not sent to the Heart Institute until the situation was dire. Now she and Greg agree that it should have been sooner. Greg urged, “People have to know that this is available. They have to say to their doctor — what about the Heart Institute? Can you get me up there? Do I need to go up there? The main thing is — ask questions.” Donna agrees, “and you have to complain — it’s something I didn’t do — I was never a complainer.”

The couple may not agree on television shows, but one thing they agree on wholeheartedly is the impact the Heart Institute made on their lives: “The Heart Institute was just fantastic. They were with us every step of the way. It was unreal”, said Greg.

“Oh my God, the treatment I got, was like second to none”, added Donna. “It was like from the time I got in the door, till I came out the door — it was unbelievable.”

“I never saw care, or was given care, like I was given here”, Donna professed. “If I won the lottery today, they would get half of what I won. Because they deserve it. ” Greg added that they truly felt seen and heard by all of the staff, and not treated like a number. When Donna’s surgeon, Dr. Boodwhani called Greg after her surgery, Greg was impressed: “when he called me after surgery, he didn’t just say, she made it, and that’s it — he took the time to talk to me. He had time for me.”

The excellent care did not stop with the doctors. “The nurses have compassion for you — they feel. They’re not just there to do a job”, said Greg.  “They’re angels.” echoed Donna.  “I can’t get over how kind they were to me.” Greg added: “they also looked after me — not only did they look after her, but they never forgot about me.”

“I take my hat off to them, I really do. I can’t thank them enough, even down to the lady who came into the room to clean up”, said Greg. Both Donna and Greg struggle to find the words to truly thank The Heart Institute. “I can’t give back enough to say thank you — for what they gave us”, said Donna.

“They gave me life.”

“They gave us life”, Greg added.

In addition to the doctors, nurses, and staff at The Heart Institute, it goes without saying that Donna’s heart transplant would not have been possible without her donor. “Whoever gave me the chance at a second life — God bless them, because I pray for their soul every night”, she said. Donna credits her faith, strength, and relationship with her husband for helping her through this experience. “I thank God for my faith — next is my strength”, she said. “Even though I went through all that, I never once thought I wasn’t going to make it.”

Donna’s message for others who may be facing what she went through is to think positively: “Don’t ever give up because if you give up — you’re finished. Fight to the bitter end.” She adds, “It was my faith, my strength, and my better half here — he was with me 100% of the way. I couldn’t have asked for a better partner if I could invent one.”

Printed with permission from the Prevention and Wellness Centre at The University of Ottawa Heart Institute.