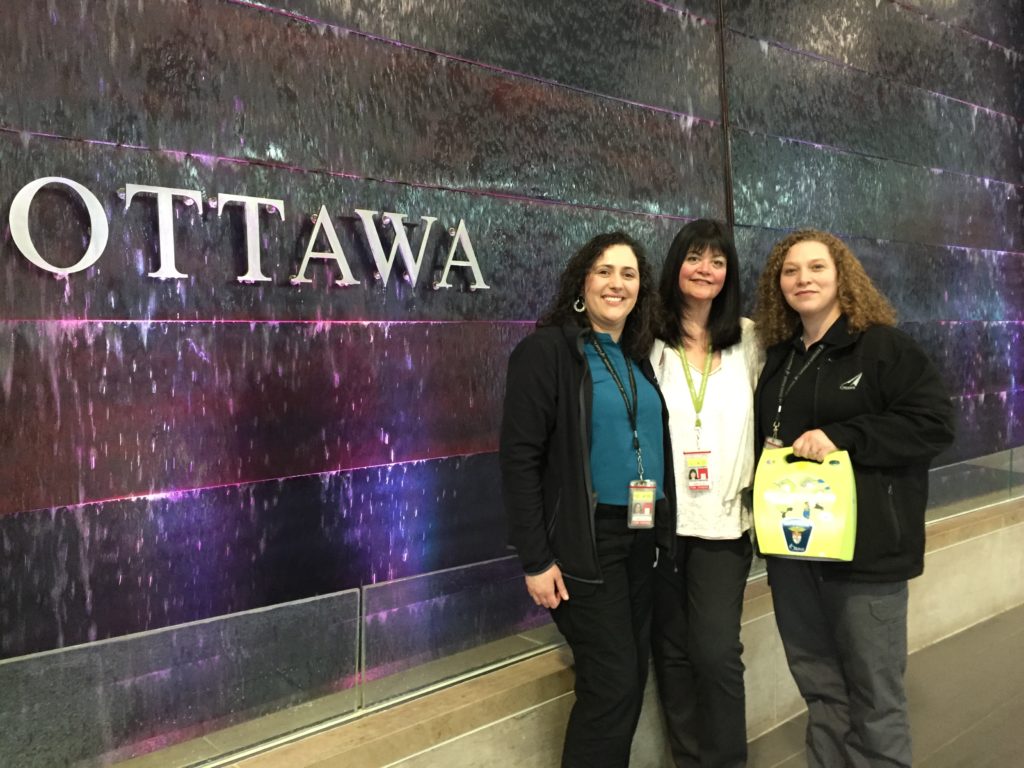 A project manager at the MacDonald-Cartier International Airport, and an interior designer by trade, Mary Armour didn’t like the look of the automated external defibrillators (AED) that hang on the walls throughout the airport. She used to think they were ugly, cluttering up the airport’s sleek design lines.

Now she thinks they’re the most beautiful things in the world.

In August 2018, Mary’s life changed. She had eaten lunch at her desk, but after finishing, she felt unwell — as if she might faint. She decided to let one of her co-workers know and ask her to keep an eye on her, but on her way to do that, she collapsed.

“The next thing I remember is waking up in the Heart Institute five days later,” she says. “I’m really lucky. I work in an open office environment and a colleague heard me fall. Apparently, I also made a sound when I did.”

Her coworker called 911 and also the airport’s operation response centre. Two emergency responders — Lianne Degen and Lyann Lemieux — were working together that day and were at Gate 6 in the U.S. departures area when they got the call. They moved swiftly through the airport — they don’t run and possibly alarm airport passengers— and on their way they grabbed an AED off the wall.  “There are more than 20 of them all through the airport.” Lianne explains.

The information they’d received was vague— but their protocol is always to grab one. And good thing they did. Mary was in cardiac arrest, what medical professionals call an electrical issue, and only had the faintest heartbeat. The AED was exactly what they needed. Time was in short supply, they had six minutes to start using it before Mary would have, at best, lost cognitive function or, at worst, been beyond saving.

When they arrived, Ottawa Police Constable Andy Hall, was already there, checking her vitals. Const. Hall said they needed to start CPR right away.

“As first responders, we all work as a team. He was already at her head,” says Lianne.  “The beautiful thing about CPR and training is that when you have each other, you’re not as stressed, teamwork made the difference” Lyann added. “We took turns. The machine tells you what to do. When we started, Mary had no vitals, but we had made it within the six-minute period.”

Mary adds that her cardiologist believes she wouldn’t have survived without “Lianne and Lyann” and the AED.  “He said it should be mandatory that building owners and operators at any place the public gathers have an AED.”  Police officers and paramedics carry them in their vehicles, but there are no laws stating public places must have them, though the Chase McEachern Act champions public access to them. Under the Ontario defibrillator access initiative, the province will send 2,500 AEDs to publicly accessible sport and recreation facilities and schools and will certify 25,000 individuals in CPR.

The devices are extremely easy to use, according to Lianne and Lyann, who say they tell you where to put the electrodes and coach you every step of the way. Once the machine finished its job, it uploaded all of the information to the hospital so doctors there could take a look.  There were many chest compressions involved in saving Mary. When she woke up, she’d survived a cardiac arrest, but had 11 broken ribs as a result.

Mary arrived first at the emergency room of the Civic Hospital, and was then transferred to the University of Ottawa Heart Institute.  Her daughters, Michelle, then 24 and Melissa, 28, were told the prognosis wasn’t very good. Looking at her now — a vibrant 57-year-old at the height of her career — it’s hard to imagine this all happened barely over a year ago. But the facts bear out the doctors’ prognosis: Fewer than two per cent of people who have a cardiac arrest outside of a hospital survive. “Everything they saw led them to believe I wouldn’t survive,” Mary says.

She was in the Heart Institute from August 1 to 24.  “I had a lot of tests, including an MRI to help determine the cause” she says. “Ultimately, my doctor called it a weak heart muscle and said as long as I take my medication, I’ll be fine.”  She also has a defibrillator built into her chest so if something happens, it will kick in. Mary adds“I think it will feel like a horse kicking me from the inside.”

Mary lauds the cardiac rehabilitation program at the Heart Institute, which included physiotherapy, nursing and vocational counselling. The vocational counsellor asked her what her workdays were like and told her she had to slow down a bit. The counsellor helped her work with her “very supportive” boss to make that happen.

A strong, independent, single mother, Mary said it was difficult to have people doing things for her, especially when the lines between her personal and professional life blurred.

“I couldn’t drive my first three months back at work, so my boss, who lives in my neighbourhood, drove me to work every day. Now that I’m back to driving, I leave every day on time. That would have been unheard of before. I used to ask operations staff to leave the lights on for me because I worked so late. I’m lucky the cardiac arrest didn’t happen when I was here alone at night.”  Mary continues “I’m fortunate that I have an employer who’s 100 per cent behind me in whatever I need. The incident was very traumatic for a lot of colleagues,” Mary says. “They could hear it all happening.” The airport authority almost immediately set up free CPR training that employees could take during working hours. Ninety-one took part.

Other lifestyle changes have included walking her dog for at least 30 minutes a day and making her own lunches in order to eat healthier.

Mary also took part in a cardiac support group.  “To be with a group of people with heart issues and learning the importance of cognitive behavioural therapy was amazing,” she says. “When the course was over, the instructor asked if we’d be interested in joining any of the spinoffs. I checked them all off. I haven’t said no to anything the Heart Institute has offered.”

Asked what life is like for her now, Mary replies “optimistically cautious” and takes each day as a gift.  “You’re conscious of the fact that you’re not as invincible as you think you are,” she says. “It’s important to realize that. Listen to your body. I was on blood pressure medications, but it wasn’t enough.”

And she’s thankful every day for the co-workers who saved her life.

“My cardiac arrest happened in my workplace,” she says. “Had it not been for these guardian angels, I wouldn’t be here.”